In the early 2000’s Young Entrepreneur Nicholas Woodman found himself at the hands of two failed start-up Business’s due to the Dotcom Crash. It was at this point that he decided to take a 5-month surf trip with his then Girlfriend. Woodman wanted to document his trip in southeast Asia, so he built his first camera wrist housing for 35mm cameras, and the concept of GoPro was born.

Woodman didn’t know it at the time, but his will to document his trip would lead to his success today. The original waterproof camera strap he made was meant for already existing 24 exposure 35mm cameras.  At the end of his trip, he thought of the idea as “Wrist cameras for surfers, that was it, a nice, simple business” a good transition from his failure with his first two companies.

Woodman spent the next 3 months with his girlfriend living out of his 1973 VW van along the California coast, selling jewelry made from beads he had gotten in southeast Asia, for an impressive surcharge. Between his profits, and a few family loans, Woodman was able to take his idea away from the drawing board. After finding a company based in china who agreed to modify their cameras to fit his case, he took his the first 35mm Hero cameras to a San Diego action sports trade show in 2004, with the intention of marketing to surfers. Starting in 2005, woodman starting selling his 35mm Hero Cameras.

Soon after this, Woodman realized that his cameras were just as useable on land as in water, and began marketing to other action sports.

January 2014- GoPro is the No.1 brand channel on YouTube.

Archive of all GoPro Models: 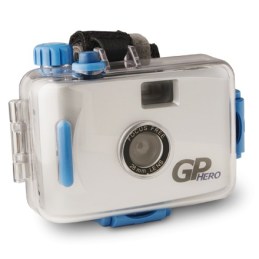 Specifications: Had a 3-megapixel camera and shot at a standard definition of 512 x 384.

Specifications: Was marketed as the “HERO Motorsport Wide”. Had a 5-megapixel photo sensor and shot at a standard definition of 512 x 384. Ran on two AAA batteries, had 16 MB of internal memory, and had a 2 GB SD card slot. First camera on the lineup to use an ultra-wide lens (170 degree angle of view). Had a different housing compared to previous models. 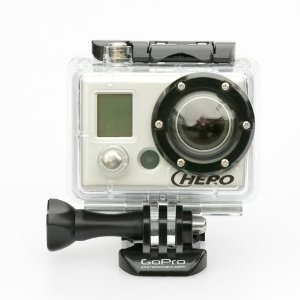 Specifications: Had a 5-megapixel photo sensor and shot at a maximum of 1080p. Had an accessible SD card slot. Had the ability to change to 5 modes: 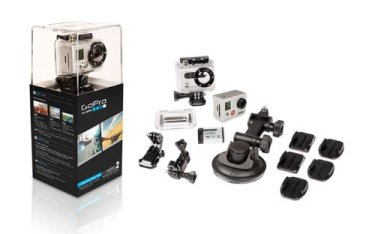 Specifications:  Had a 11-megapixel photo sensor.Had an accessible SD card slot. Came in three different editions: Outdoor, Motorsports, and Surf Editions. Was able to shoot in 120 fps. Had the ability to change to 7 modes:

Dimensions: 2.9 oz, and is 50% smaller and 40% lighter than the previous GoPros. Able to withstand functional water depth of 131 feet.

Available in both black and silver editions. Has a 12-megapixel camera. Bluetooth connection to connect with the  mobile phone application. Has a new touch screen display on the backside of the camera. New processor allows this GoPro to be twice as fast as the Hero 3+ Black Edition. Has the ability to record 4k video at 24, 25, 30 fps with 25 other resolutions. The Silver Edition is basically the Hero 3 Black Edition with the addition of a micro speaker, and built in touch screen display.

The success of the GoPro camera comes from its distinguishable quality of being an inexpensive mobile camera device that can take a punch. According to the creator, Nick Woodman, the hardest challenge he came across when designing the device was finding a simple camera with as few bells and whistles as possible,”I went to all major camera shows, walking every aisle, and I’m maniacal”, the young innovator describes, “When I say I looked at every booth and shop, I looked everywhere twice.” At the time not many other electronic companies were producing or even conceiving a concept in the way the GoPro was imaged to be. Most companies had progressed enough to be investing in complex recording devices meant for professionals, and models that could be dumbed down enough so average consumers could operate them.

Woodman’s intent was to simply create a camera that could take photos, and eventually videos, for the active lifestyle the young surfer lived. Eventually a successful model of the GoPro camera was created around 2007, roughly the same time Youtube was bought by Google and becoming popular amongst the public. The timing of this coincidental relationship constituted a demand for mobile video cameras, which had immense influence over the company’s success and the camera’s popularity. However, it wasn’t the strategic marketing that boosted this camera’s sales, but the new philosophical relationship of transitioning the cameraman to becoming the subject for audiences; especially among the sports world. Much like the business model of Red Bull, which Woodman admits as his inspiration for his company’s success, is GoPro’s limitless creative uses that consumers and professionals alike made of it: in Woodman’s eyes, it was all about the experience. Originally, the seemingly indestructible camera was designed for a wrist strap that could be flipped down when not in use, then conveniently flipped up when the right shot was present, however, the GoPro company boosted the device’s compatibility with additional mounts that created a lego-like experience for users to strap on almost any surface.
Besides other small electronic companies, such as Cisco and their small video recording devices, not many had the momentum nor the innovativeness to compete with the GoPro cameras. Unfortunately for Woodman and his company, smartphones closed in on that competition when Apple’s first iPhone came out in 2009 with video recording abilities. Nowadays smartphones have almost a monopoly on the relevant market, but still lack the capabilities of surviving the treacherous environment GoPro camera’s were meant for. More worrisome, however, is GoPro’s high quality technology is becoming ample within the electronics market, creating more competing devices like The Cube and HTC’s Re who offer similar quality and experience, but more cost efficient for consumers. While GoPros have a stable hold on the  world’s sports market, GoPro cameras are steadily increasing in price as their products progress in quality, which causes regular consumers to seek out cheaper alternatives. As of now, the GoPro camera still holds the advantage to make it, or ironically, break it.